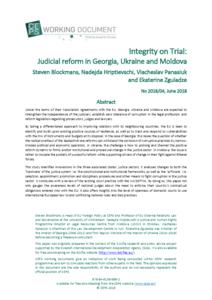 Integrity on Trial: Judicial reform in Georgia, Ukraine and Moldova

Under the terms of their Association Agreements with the EU, Georgia, Ukraine and Moldova are expected to strengthen the independence of the judiciary, establish zero tolerance of corruption in the legal profession, and reform legislation regarding prosecutors, judges and lawyers.

By taking a differentiated approach to improving relations with its neighbouring countries, the EU is keen to identify and build upon existing positive sources of resilience, as well as to track and respond to vulnerabilities with the mix of instruments and budgets at its disposal. In the case of Georgia, this raises the question of whether the radical overhaul of the Saakashvili-era reforms can withstand the corrosion of corruptive practices by narrow-minded political and economic operators. In Ukraine, the challenge is how to prolong and channel the positive reform dynamic to firmly anchor institutional and procedural change in the justice sector. In Moldova, the issue is rather to insulate the pockets of successful reform while supporting drivers of change in their fight against illiberal forces.

This study identifies innovations in the three associated states’ justice sectors. It analyses changes to both the ‘hardware’ of the justice system, i.e. the constitutional and institutional frameworks, as well as the ‘software’, i.e. selection, appointment, promotion and disciplinary procedures and other means to fight corruption in the justice sector. It concludes with a review of the existing court practice with the AA/DCFTAs. By doing so, this paper not only gauges the awareness levels of national judges about the need to enforce their country’s contractual obligations entered into with the EU, it also offers insights into the level of openness of domestic courts to use international/European law to end conflicting national rules and bad practices.