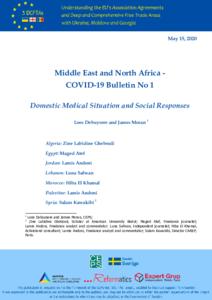 While Europe swiftly became one of the epicenters of the Covid-19 pandemic, the EU's Southern Neighbourhood has so far been less affected. The largest number of infections and deaths have been counted in Egypt, Morocco and Algeria, while Jordan and the Gaza Strip have thus far not seen a major outbreak. A lack of testing may explain why the number of infections has been rather low relative to the region's population size, yet many countries in the Southern Neighbourhood have also taken early steps to curb infections. As most countries' health care systems are not equipped to deal with major health emergencies, many MENA governments acted swiftly by closing borders and putting lockdowns in place by mid-March.

While fears are rising about a second wave of infections, most MENA countries see their already existing economic crises exacerbated by drops in income from tourism, oil and remittances. Poor families and informal workers are especially vulnerable during the pandemic. Inequalities and unemployment are on the rise, as is the likelihood of major future protest movements, particularly in Algeria and Lebanon. Already dire humanitarian situations, like the ones in Syria and Gaza, have become even more untenable. One could describe the socio-economic situation in the region as a ticking time bomb.

In this bulletin, we present comparative summaries of the situation in a number of MENA countries. These bulletins will be continued fortnightly, each organised around a central theme. In this first edition, we take stock of the domestic medical situation and the social response to the coronavirus outbreak.


The analysis of the situation in Libya was included on May 18.