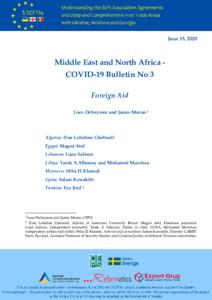 In this third bulletin, we provide an update on the latest developments in the rates of infection and mortality in the region, the general easing of restrictions, as well as the range and extent of international assistance.

Overall, as in Europe, the pandemic is now slowing down in most MENA countries, with the exception of Egypt where cases have doubled over the past two weeks. Many countries have some type of exit plan in place that is gradually unfolding. The key challenge ahead, however, will be dealing with the socio-economic (and political) repercussions of the pandemic. For that, foreign assistance and support is key.

So far, while not always the most visible, the EU has played the most significant and appreciated role in supporting partner countries in the southern Neighbourhood. In contrast to China, the region’s second donor, the EU has not only provided medical assistance but also grants and loans to tackle the mid- and long term impact of the crisis. Yet while China remains popular and visible, it is Russia, the Gulf States and to a lesser extent the US that have been largely absent from the foreign aid scene.