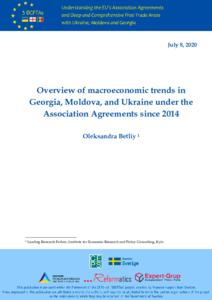 Overview of macroeconomic trends in Georgia, Moldova, and Ukraine under the Association Agreements since 2014

The year 2020 has brought enormous challenges for the entire world. The COVID-19 triggered the global economic crisis with risks of high unemployment, a decline in real disposable income, and the need to find fiscal space to finance increased health needs and support the business during lockdowns.

Georgia, Moldova and Ukraine got a chance to strengthen their economies after 2014, when they signed the Association Agreements (AAs) with the EU, embedding the establishment of the DCFTAs. The AAs envisaged a broad spectrum of reforms, aimed at making all three economies more resilient and sustainable, partly thanks to deeper economic ties with the EU.

Another common factor for all three countries is their unresolved secessionist confrontations with Russia. However, only Ukraine is in active military conflict with Russia after the latter annexed Crimea and occupied a part of Donbas in 2014. In the case of Georgia, a creeping occupation takes place at the so-called dividing line with occupied South Ossetia, while there is a standstill situation with occupied Abkhazia.

In this article, we analyse whether the three countries used the window of opportunity provided by the AA/DCFTAs to become more sustainable, prosperous and resilient by the time they entered the coronacrisis in 2020. The economic developments during the coronacrisis are not considered.

The article is structured as follows. We start with the policy framework in all three countries and then proceed to the discussion of major macroeconomic parameters, including data for the economy as a whole, the fiscal policy and external sectors, and labour market. In the end, we provide conclusions.