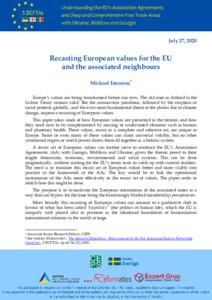 Recasting European values for the EU and the associated neighbours

Europe’s values are being transformed before our eyes. The old ones as defined in the Lisbon Treaty remain valid. But the coronavirus pandemic, followed by the eruption of racial protests globally, and the even more fundamental threat to the planet due to climate change, impose a recasting of European values.

This paper takes stock of how European values are presented in the treaties, and how they need now to be complemented by missing or understated elements such as human and planetary health. These values, recast as a complete and coherent set, are unique to Europe. Some or even many of these values can claim universal validity, but no other continental region or world power shares them all together as a holistic system.

A recast set of European values can further serve to reinforce the EU’s Association Agreements (AA) with Georgia, Moldova and Ukraine, given the threats posed to their fragile democratic, economic, environmental and social systems. This can be done pragmatically, without waiting for the EU’s treaty texts to catch up with current realities. The need is to translate this recast set of European values better and more visibly into practice in the framework of the AAs. The key would be to link the operational instruments of the AAs more effectively to the recast set of values. The paper seeks to sketch how this might be done.

The purpose is to re-motivate the European orientations of the associated states in a way that can bypass for the time being the frustratingly blocked membership perspectives.

More broadly this recasting of European values can amount to a qualitative shift in favour of what has been called ‘biopolitics’[1] (the politics of human life), which the EU is uniquely well placed also to promote as the ideational foundation of humanitarian international relations in the world at large.

[1] See Andrey Makarychev, ‘The Advent of Biopolitics – Repercussions for the EU, Russia and Eastern Partnership Countries’, 3 DCFTAs  op-ed No 22/2020.