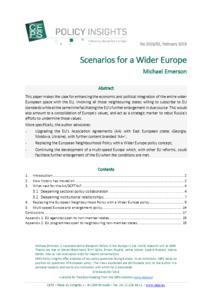 Scenarios for a Wider Europe

This paper makes the case for enhancing the economic and political integration of the entire wider European space with the EU, involving all those neighbouring states willing to subscribe to EU standards while at the same time facilitating the EU’s further enlargement in due course. This would also amount to a consolidation of Europe’s values, and act as a strategic marker to rebut Russia’s efforts to undermine those values.