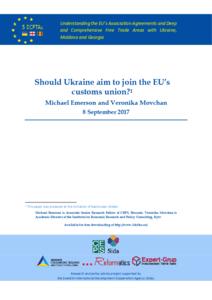 Should Ukraine aim to join the EU’s customs union?

This note takes up the question how possibly to build on Ukraine’s Association Agreement (AA) and Deep and Comprehensive Free Trade Area (DCFTA) with the EU through some fresh initiative to give renewed political and economic momentum to Ukraine’s European integration process. A perspective for full membership of the EU would be highly welcome on the Ukrainian side, but there is no consensus for this on the EU side, hence the question whether there are alternative ideas.

The customs union hypothesis, now advocated by President Poroshenko, is examined in some detail. It would represent a further development of either the DCFTA or (hypothetically) the EEA options, and would be largely an alternative to the PEM Convention, which however Ukraine recently began to implement.

The customs union hypothesis could only realistically come in after successful implementation of the DCFTA at the end of its transition periods of 7 to 10 years for eliminating tariffs, and even 15 years in the important sector of automobiles; unless Ukraine wanted to accelerate the process.

Today, these key conditions for success are only partly valid for Ukraine’s hypothetical accession to the EU’s customs union. In particular Ukraine has major trading interests globally, which would be constrained by joining the EU’s customs union. Accession to the customs union would also require a very high level of trust between the customs services of the two parties, which in turn requires that corrupt and inefficient practices on the side of Ukraine’s customs services be comprehensively corrected.