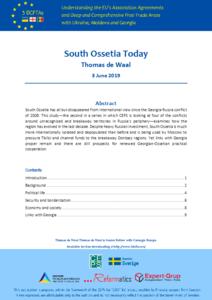 South Ossetia has all but disappeared from international view since the Georgia-Russia conflict of 2008. This study—the second in a series in which CEPS is looking at four of the conflicts around unrecognized and breakaway territories in Russia’s periphery—examines how the region has evolved in the last decade. Despite heavy Russian investment, South Ossetia is much more internationally isolated and depopulated than before and is being used by Moscow to pressure Tbilisi and channel funds to the breakaway Donbass regions. Yet links with Georgia proper remain and there are still prospects for renewed Georgian-Ossetian practical cooperation.