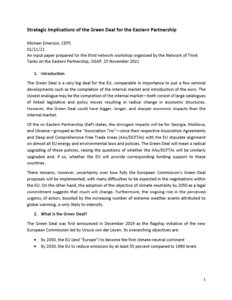 Strategic Implications of the Green Deal for the Eastern Partnership

An input paper prepared for the third network workshop organized by the Network of Think Tanks on the Eastern Partnership, DGAP, 25 November 2021

Of the six Eastern Partnership (EaP) states, the strongest impacts will be for Georgia, Moldova, and Ukraine—grouped as the “Association Trio”—since their respective Association Agreements and Deep and Comprehensive Free Trade Areas (AAs/DCFTAs) with the EU stipulate alignment on almost all EU energy and environmental laws and policies. The Green Deal will mean a radical upgrading of these policies, raising the questions of whether the AAs/DCFTAs will be similarly upgraded and, if so, whether the EU will provide corresponding funding support to these countries.

There remains, however, uncertainty over how fully the European Commission’s Green Deal proposals will be implemented, with many difficulties to be expected in the negotiations within the EU. On the other hand, the adoption of the objective of climate neutrality by 2050 as a legal commitment suggests that much will change. Furthermore, the ongoing rise in the perceived urgency of action, boosted by the increasing number of extreme weather events attributed to global warming, is only likely to intensify.