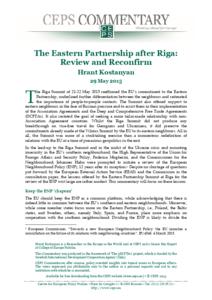 The Eastern Partnership after Riga: Review and Reconfirm

The Riga Summit of 21-22 May reaffirmed the EU’s commitment to the Eastern Partnership, underlined further differentiation between the neighbours and reiterated the importance of people-to-people contacts, finds Hrant Kostanyan in this CEPS Commentary. All in all, however, the Summit was more of a stocktaking exercise than a momentous redefinition of relations with the EU at a time of precarious geopolitics in the east. Politically, it is important now for the EU to defend what it already offered to the eastern neighbours and reconfirm the Eastern Partnership as a defining feature of its foreign policy and fundamental to the EU’s larger Security Strategy review.