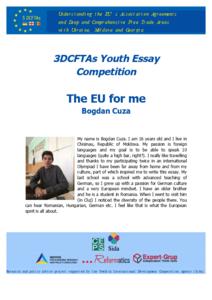 The EU for me

What is the European Union exactly? It might seem like a trivial question for some—“surely, we’re educated people, we know that the EU is a political and economic union of 28 member states that are located primarily in Europe.” I don’t know about you, but I personally do not see any value in that response. Politics and economics aren’t my main occupations. That definition is of little value to me. But as a proud supporter of the EU, how should I come about to explain it not only to myself but to everyone else? I think this is especially relevant for the countries whose goal is to join the EU. Is our only goal to link into the European economy or to integrate ourselves into every part of the EU, because (at least for me) it is not only defined as a political and economic union; it’s culture, it’s a common identity, it’s opportunities, it’s progress.

The European Union is a different concept from other unions of states. Every member gets to keep its independence, yet it is not only an economic union. It also provides a legal backbone for every state and it promotes the culture of every nation at the same level (e.g. all of the official languages of a member state are also official languages of the EU). As such, I think of the EU as starting from an idea of a common Europe, united by history and working towards the benefit of everyone. Looking at the history of Europe, we can clearly see that centuries of division have never done any good to anyone and that uniting through diversity is the only thing that can assure further progress for every nation.