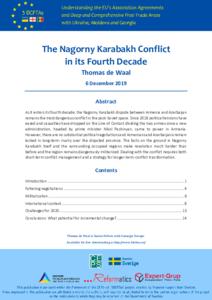 The Nagorny Karabakh Conflict in its Fourth Decade

As it enters its fourth decade, the Nagorny Karabakh dispute between Armenia and Azerbaijan remains the most dangerous conflict in the post-Soviet space. Since 2018 political tensions have eased and casualties have dropped on the Line of Contact dividing the two armies since a new administration, headed by prime minister Nikol Pashinyan, came to power in Armenia. However, there are no substantial political negotiations and Armenians and Azerbaijanis remain locked in long-term rivalry over the disputed province. The facts on the ground in Nagorny Karabakh itself and the surrounding occupied regions make resolution much harder than before and the region remains dangerously militarized. Dealing with the conflict requires both short-term conflict management and a strategy for longer-term conflict transformation.