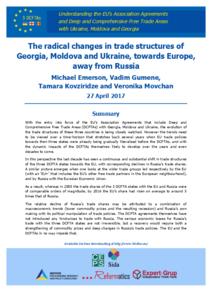 The radical changes in trade structures of Georgia, Moldova and Ukraine, towards Europe, away from Russia

With the entry into force of the EU’s Association Agreements that include Deep and Comprehensive Free Trade Areas (DCFTAs) with Georgia, Moldova and Ukraine, the evolution of the trade structures of these three countries is being closely watched. However the trends need to be viewed over a time-horizon that stretches back several years when EU trade policies towards then three states were already being gradually liberalised before the DCFTAs, and with the dynamic impacts of the DCFTAs themselves likely to develop over the years and even decades to come.

In this perspective the last decade has seen a continuous and substantial shift in trade structures of the three DCFTA states towards the EU, with corresponding declines in Russia’s trade shares. A similar picture emerges when one looks at the wider trade groups led respectively by the EU (with an ‘EU+’ that includes the EU’s other free trade partners in the European neighbourhood), and by Russia with the Eurasian Economic Union.

As a result, whereas in 2005 the trade shares of the 3 DCFTA states with the EU and Russia were of comparable orders of magnitude, by 2016 the EU’s share had risen on average to around 5 times that of Russia.

The relative decline of Russia’s trade shares may be attributed to a combination of macroeconomic trends (lower commodity prices and the resulting recession) and Russia’s own making with its political manipulation of trade policies. The DCFTA agreements themselves have not introduced any hindrances to trade with Russia. The serious economic losses for Russia’s trade with the three DCFTA states are not irreversible, but a recovery would require both a strengthening of commodity prices and deep changes in Russia’s trade policies. The EU and the DCFTAs in no way impede that.