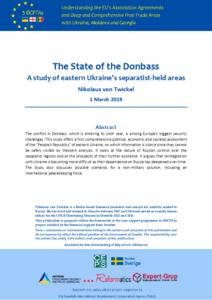 The State of the Donbass: A Study of Eastern Ukraine’s Separatist-held Areas

The conflict in Donbass, which is entering its sixth year, is among Europe's biggest security challenges. This study offers a first comprehensive political, economic and societal assessment of the "People's Republics" of eastern Ukraine, on which information is scarce since they cannot be safely visited by Western analysts. It looks at the nature of Russian control over the separatist regions and at the prospects of their further existence. It argues that reintegration with Ukraine is becoming more difficult as their dependence on Russia has deepened over time. The study also discusses possible scenarios for a non-military solution, including an international peacekeeping force.