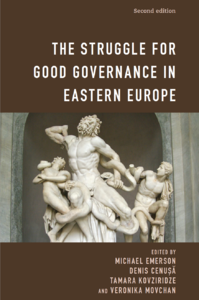 The Struggle for Good Governance in Eastern Europe

At a time when many regions of the world, Europe included, see a resurgence of authoritarianism, several countries in Eastern Europe: Ukraine, Moldova, Georgia and Armenia, are struggling to counter this trend by developing European-style democracies.

In this second edition, three years after the first, the story of Eastern Europe’s dramatic struggles to achieve properly functioning democracies and the rule of law rages on, warranting deeper analysis and substantial updating.

Highlights during this period include the spectacular ascent but questionable achievements of Vladimir Zelensky in Ukraine, the rise and fall of the pro-Russian presidency of Igor Dodon in Moldova, the deterioration of Georgia’s democracy under oligarchic state capture rescued and reversed by EU mediation, and the advent to power of Nikol Pashinyan in Armenia, now threatened by defeat in the second war over Nagorno Karabakh.

This book complements three landmark Handbooks on the deepening relationships between the European Union and Ukraine, Moldova and Georgia (with their third editions forthcoming).

Co-published with Rowman and Littlefield International (RLI), this book can be purchased from the RLI website (www.rowmaninternational.com).