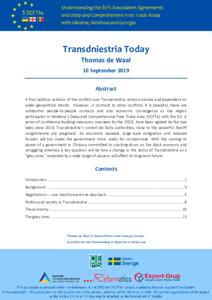 A final political solution of the conflict over Transdniestria remains elusive and dependent on wider geopolitical trends. However, in contrast to other conflicts, it is peaceful, there are substantial people-to-people contacts and also economic convergence as the region participates in Moldova’s Deep and Comprehensive Free Trade Area (DCFTA) with the EU. A series of confidence-building measures, overseen by the OSCE, have been agreed by the two sides since 2016. Transdniestria’s current de facto authorities, close to the powerful Sheriff conglomerate are pragmatic. An economic squeeze, large-scale emigration and reduced Russian aid has made the government more ready for compromise. With the coming to power of a government in Chisinau committed to cracking down on the black economy and smuggling schemes, a key question will be how a change in the status of Transdniestria as a “grey zone,” exploited by a wide range of players, will affect its long-term future.