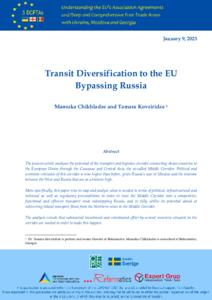 The present article analyses the potential of the transport and logistics corridor connecting Asian countries to the European Union through the Caucasus and Central Asia, the so-called Middle Corridor. Political and economic relevance of this corridor is now higher than before, given Russia’s war in Ukraine and the tensions between the West and Russia that are at a historic high.

More specifically, this paper tries to map and analyse what is needed in terms of political, infrastructural and technical as well as regulatory preconditions in order to turn the Middle Corridor into a competitive, functional and efficient transport route sidestepping Russia, and to fully utilize its potential aimed at redirecting inland transport flows from the Northern route to the Middle Corridor.

The analysis reveals that substantial investment and coordinated effort by several countries situated on the corridor are needed in order to make this happen.