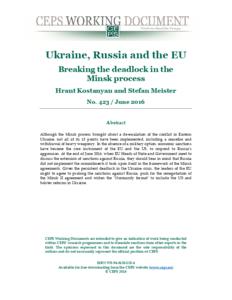 Ukraine, Russia and the EU: Breaking the deadlock in the Minsk process

Although the Minsk process brought about a de-escalation of the conflict in Eastern Ukraine, not all of its 13 points have been implemented, including a ceasefire and withdrawal of heavy weaponry. In the absence of a military option, economic sanctions have become the core instrument of the EU and the US, to respond to Russia’s aggression. At the end of June 2016, when EU Heads of State and Government meet to discuss the extension of sanctions against Russia, they should bear in mind that Russia did not implement the commitments it took upon itself in the framework of the Minsk agreements. Given the persistent deadlock in the Ukraine crisis, the leaders of the EU ought to agree to prolong the sanctions against Russia, push for the renegotiation of the Minsk II agreement and widen the ‘Normandy format’ to include the US and bolster reforms in Ukraine.