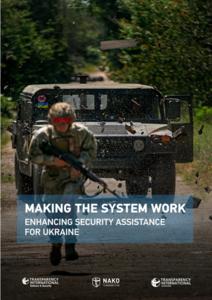 Since 2014, Ukraine has made significant progress in monitoring and accounting for security assistance at the operational and tactical levels. Security assistance providers have imposed requirements that have encouraged recipient institutions to put in place more robust monitoring and reporting systems. Donor interviews indicate positive shifts between 2014 and 2017, with greater appreciation by Ukrainians of the need for monitoring and improvement in their systems. More rigorous processes and monitoring have reduced the risks of small-scale misappropriation and sale on the black market, for example. There remains significant room for improvement and better management in the provision of security assistance: some monitoring processes still work slowly, which delays end-use reporting and makes it more difficult to track training or equipment provided.

Our research also found that security assistance is not always provided in accordance with the needs of the Ukrainian defence forces, and in some cases, the equipment provided is missing components that are vital for it to work efficiently and to its full capacity. Equipment is also sometimes distributed to troops who lack the training to operate it effectively, and a lack of spare parts and maintenance capability renders some equipment useless. These shortcomings do not necessarily directly lead to corruption, as there is little evidence of private gain, except in a few instances in which individuals misappropriate equipment. However, they do represent a waste of donor funds and a failure to meet the strategic needs of the Ukrainian defence forces.

On a strategic and political level, reform remains slow and incomplete. Oversight and access to information remains poor, with excessive secrecy hindering reform and oversight throughout the defence establishment; for example, acquisition documents remain classified, and according to donors interviewed, planned priorities remain vague.1 The opacity of the Ukrainian defence establishment, particularly around the state-owned defence giant UkrOboronProm, reduces donor trust and leads to poor planning and less proficient provision of security assistance. We believe donors could do more to leverage their influence to bring about more fundamental reforms in the Ukrainian defence sector.

Ultimately, if donors are to ensure that their taxpayer funds are used to best effect in Ukraine, they should leverage the influence that comes with their training and equipment to press for greater pace on systemic reforms and improved transparency and accountability, particularly in the procurement and security assistance planning process. This will help ensure that the training and equipment they provide meets Ukraine’s most important requirements and help create a more stable and accountable defence sector.