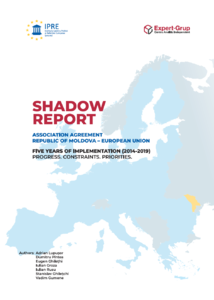 The Institute for European Policies and Reforms and the Expert-Group have prepared the Alternative Report, which provides an unbiased view on the evolution of the EU-Moldova dialogue, while reflecting the most important progress in implementing the commitments undertaken by the Republic of Moldova, as well the main constraints that did not allow the full use of the Association Agreement. Lastly, based on the findings, a series of strategic priorities were formulated, as a recommendation, in the direction of which efforts should be strengthened in the next period. The findings of the report can also provide added value in the context of evaluating the 20 Deliverables of the Eastern Partnership by 2020 and setting priorities for the coming years.

The report represents a qualitative evaluation of the developments recorded during September 1, 2014 - September 1, 2019 in the main sectors with spill-over effect, provided for by the five titles of the Association Agreement, namely: Title II - Political dialogue and reforms, Title III - Freedom, Security and Justice, Title IV - Economic and sectoral cooperation, Title V - Trade and trade related matters (DCFTA), Title VI - Financial assistance, anti-fraud and control provisions. This Alternative Report was prepared following a thorough analysis of the institutional and legal framework, the reports on the implementation of the Association Agreement and other national policy documents, published by the authorities of the Republic of Moldova and the institutions of the European Union. Alternative evaluations conducted over the last five years have also been used. The draft report was discussed and revised in the validation meetings and focus groups organized on October 8-24, 2019 with the participation of representatives of national authorities and nongovernmental actors.