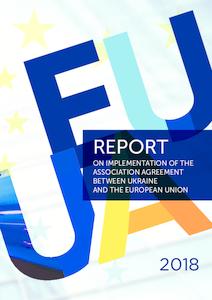 Government Office for European and Euro-Atlantic Integration of Ukraine.

The Ukraine-EU Association Agreement envisages monitoring and assessment of its implementation, both jointly and separately by each Party.

The purpose of the Report is to inform Ukrainian people, NGO representatives and the international community, in particular, the EU institutions and the EU Member States, of Ukraine’s progress in achieving the objectives of political association and economic integration with the EU in order to facilitate broad discussion and analysis of actions taken by government authorities.

This Report is a result of the comprehensive assessment on implementation by Ukraine of the Ukraine-EU Association Agreement in 2018. The progress in the implementation of the Agreement was assessed based on the analysis of the quarterly reports by the government authorities.

The specific tasks for the implementation of the Agreement are based on the Agreement itself, the decisions of the Ukraine-EU bilateral association bodies, as well as on the road maps, concepts and state policy strategies.

As is the case with the previous year’s report, the indicators of 2018 Report demonstrate current progress in fulfilling the Agreement obligations, which expired in the reporting year. The current progress is calculated as a percentage and shows the proportion of actions fulfilled within each year, both in general and broken down by certain specific spheres of public life. It reflects the proportion of actions fulfilled as of the date of the assessment to the number of actions planned for the year.

Additionally, it offers an indicator of the overall progress of the fulfilment of all obligations stipulated by the Agreement. The overall progress shows the dynamics of the implementation of the Agreement throughout its duration, starting with the provisional application of its certain provisions in 2014, and reflects the percentage of the actions fulfilled from the total number of all actions necessary for the implementation of the Agreement.