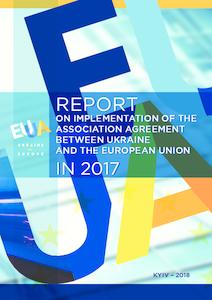 Government Office for European and Euro-Atlantic Integration of Ukraine.

This document describes the results achieved in carrying out a set of tasks and activities in pursuance of commitments assumed by Ukraine under the Association Agreement between Ukraine and the EU, Euratom and their Member States. The 2017 priority objectives were determined in compliance with the Association Agreement, the Association Agreement Implementation Action Plan approved by the Cabinet of Ministers of Ukraine on 25 October 2017 and strategies, concepts and roadmaps for harmonising legislation, which were adopted by the Cabinet of Ministers of Ukraine and authorised government authorities as part of performing Ukraine’s European integration obligations.

This Report consists of 24 titles representing the areas covered by the Association Agreement. Each title of this Report contains information on the progress achieved in the respective area in 2017 and the future steps that Ukraine is required to take with a view to performing the Association Agreement properly and timely. This Report further highlights the results of the operation of the Deep and Comprehensive Free Trade Area in 2017.

The electronic version of this Report is available on the Government Web Portal and the European Integration Web Portal.