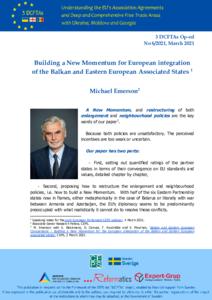 You can also access the presentation of the study given by Michael Emerson to the UNDP Regional Bureau for Europe and Central Asia.

A New Momentum, and restructuring of both enlargement and neighbourhood policies are the key words of our paper.

Because both policies are unsatisfactory. The perceived incentives are too weak or uncertain.

Our paper has two parts:

On the ratings, the Commission’s annual reports on the Balkan states summarise their assessments chapter by chapter as being in ‘good’, ‘moderate’ or ‘some’ preparedness in relation to EU standards.

We do three things with this material:

The results are that on average the two groups are broadly comparable on the sum of political,  legal, and economic policy criteria. On the political and legal the Balkans are a little ahead, while on the trade and economic cooperation policies the East Europeans are more than a little ahead.

The divergences within groups are most marked in the Balkans, where Bosnia and Kosovo are laggards. The 3 East Europeans are closer together, and closer to the better performing Balkan states than the laggards.

The data are up to date for recent political developments, notably for Georgia, which now has the lowest ratings for electoral democracy (see Table 17 of the paper). But we hope the mediation initiated by President Michel may turn this around.

Georgia’s poor score for electoral the democracy ratings is partly offset by its de-corruption achievements. Interestingly for Moldova and Ukraine it is the other way round, with recent elections conducted  correctly, but with still high levels of corruption.

On the sets of EU policies applied to the two groups.

The content of the Commission’s annual reports on the Balkans cover the same subject matter ground as the AA/DCFTAs, except that AA/DCFTAs are more precise in legal terms and with regards to the time frames for implementation. The opening and closing of chapters in the enlargement process in principle means getting precise, but this process is so slow and incomplete. For the AA/DCFTAs it is as if all chapters were opened together at the beginning. In addition the Commission is increasingly, but not completely, addressing new initiatives to both groups. The Energy Community Treaty is the best known example. There are many other examples, through to recent Covid-19 assistance. This increasing policy convergence in EU policies towards the two groups is a welcome development, on which to build for our more substantial recommendations.

On the New Momentum. In a first step there should be a more explicit harmonisation of the policy initiatives addressed to both groups, achieving greater clarity and administrative economies of scale for the EU institutions.

Second, there should be a technical unification and quantification of the ratings methodology to be applied to the two groups.This could serve as an objective basis for political conditionality over financial assistance and for the passage from one step to the next in a progressive integration process.

Third, a positive development underway is the deepening of sectoral integration between the EU on the partner states, pushed first by Ukraine for sectoral ‘unions’ – energy, digital, customs, internal market. The Green Deal is the latest example, notably again for Ukraine. Progress in such cases is conditioned on the partner state adopting the EU acquis in question.

One can further envisage progressive application of the structural funds on  objectively defined ‘more for more’ conditions, including basic EU values for democracy, the rule of law and de-corruption as well as technical approximation – i.e. with linkage to the quantified ratings.

All this so far sets the scene quite well for the progressive economic and regulatory integration of the partners states with the EU. The partner states would build up their access to the benefits of membership in line with their own will and performance.

Finally the big remaining issue is that of progressive participation in the EU’s governing institutions. Remember the old battle cry of US independence: ‘No taxation without representation’. At some point there could be a European variant, ‘No approximation without representation’,  meaning that the question of institutional participation will become crucial to secure the political legitimacy and thus sustainability of the integration of the partner states.

Our proposal is to look at each of the EU institutions for the concerns they can have over further enlargement.

By far the biggest concern is over the Council, over the prospect of more veto-carrying ‘fragile democracies’ around the table. Ongoing experiences of the EU with some of its Central European member states have made their mark, deeply. These concerns will remain for a long time, to be sure. However compromise ground can be sought in the meantime through methods of policy dialogue between Council formations and partner states without the latter having the vote. Precedents for this already exist in the case of the European Economic Area (EEA), and requests for the similar treatment come from the East Europeans in the recent Joint Letter of their foreign ministers. Similar solutions could be devised for committees and working groups (the ‘comitology’ question).

For the European Parliament these concerns may be much less acute. First all voting is done on a simple majority basis. Second, in any case the numbers present are already very big at around 700, so additions may be marginal. Progressive graduations are conceivable over the number of seats allocated, with or without voting rights, dependent on political conditionality. Participatory rights could be reversible if conditions ceased to be respected.

For the Commission, the long-standing issue remains how or when to reduce the number of members. This would mean no Commissioner until and unless a constituency system were introduced (like the IMF Board). But staff appointments could become possible.

For the EU’s two main consultative institutions – the Economic and Social Committee, and the Committee of the Regions – the problems would be least of all.

For the EU’s many agencies there are already abundant examples of how participation can be graduated depending on degree of conformity with the EU acquis in question (with forms of associate through to full participation).

The foregoing fits into what is already referred to in EU circles as the model of  ‘differentiated integration’, under which not all member states are in all EU policies (such as the euro, Schengen and Pesco), and some non-member states are in some EU policies (Schengen, internal market, euro). These developments have permitted more integration than would otherwise have been possible.

The foregoing allows us to sketch a New Momentum for the future that would see both functional and institutional integration of aspiring neighbouring states advancing progressively, with a carefully designed conditionality structure, based on the systematic quantification of ratings, as illustrated in the paper.

The question of membership would cease to be a brutal ‘in or out’ matter, but rather a matter if progressive development, in which both the aspiring states and the EU itself could be reasonably satisfied that they have a fair deal.

The proposed innovations in many respects build on developing practices. At some point however they would warrant treaty changes. This would be suitable matters for the forthcoming Conference on the Future of Europe to engage upon. But partial or provisional steps could be initiated in a time frame shorter than that needed for treaty revision.