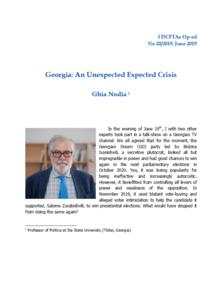 In the evening of June 19th, I with two other experts took part in a talk-show on a Georgian TV channel. We all agreed that for the moment, the Georgian Dream (GD) party led by Bidzina Ivanishvili, a secretive plutocrat, looked all but impregnable in power and had good chances to win again in the next parliamentary elections in October 2020. Yes, it was losing popularity for being ineffective and increasingly autocratic.

However, it benefitted from controlling all levers of power and weakness of the opposition. In November 2019, it used blatant vote-buying and alleged voter intimidation to help the candidate it supported, Salome Zurabishvili, to win presidential elections. What would have stopped it from doing the same again?

The opposition looked divided and ineffectual. The exiled former president, Mikheil Saakashvili, charismatic but controversial, was still considered the main alternative leader. However, he was too divisive, revered by many but hated by even more. GD could still mobilize some genuine support around a platform of not allowing Saakashvili back in power. Opposition unity was desperately needed, but with Saakashvili as the central figure, it appeared far-fetched.

The task of the government was made easy by a mixed electoral system, which gave 73 out of 150 parliamentary seats to single-mandate constituencies. In 2016, GD won 48 percent in party lists but carried all single-mandate constituencies (two winners were formally independent but supported by GD). That brought it 75 percent of all mandates. Even if its support went down further (as it was expected), they would probably still keep the majority.

However, we also opined that GD could shoot itself in the foot by some stupid little thing, and then God knows what might follow. That stupid little thing actually happened the very next day, and it was a picture: that of a Russian MP, Sergei Gavrilov, sitting in the seat of the speaker of the Georgian Parliament. He was chairing a session of the Interparliamentary Assembly on Orthodoxy, a Russia-sponsored organization. An outrage caused by seeing Gavrilov in the driver’s seat put large crowds in the street.

Apart from the general background of discontent, there was a more specific reason to explain the sharpness of popular reaction. While the GD generally supports the policy of European Integration, there had always been a nagging suspicion that Ivanishvili who made his fortune in Russia had secret pro-Russian sympathies. Many GD activists and allies are openly anti-western. The Gavrilov-in-the-speaker-seat picture fit into this presumption perfectly.

Then, the government added a substantive injury to the insult. During a rally, a radical part of protesters tried to force their way into the inner yard of the Parliament building. That gave the government a legitimate ground to use force but it conspicuously overdid what it had a right to do. Police spent rubber bullets liberally turning it into a man-hunt operation that extended far away from Parliament building. Two people lost their eyes. On the next day, even more people took it to the street.

The protesters had three major demands: resignations of the speaker of parliament, Irakli Kobakhidze, and the minister of internal affairs, Giorgi Gakharia, and the change of the electoral system to a fully proportional one. Kobakhidze resigned and GD pledged to change the electoral system. However, they still drag their feet on Gakharia: giving him up would make them look really weak, and Gakharia is the most effective minister Ivanishvili has. The protesters pledged to keep protesting until they see the minister’s back. So far, they have been doing this for seven consecutive days.

Whatever the final outcome, a lot has changed already. The GD is seriously wounded, even if not lethally yet. After using brutal methods to disperse crowds, they lost their trump card of claiming they are more humane than Saakashvili’s government. Whatever wrong their predecessors did, they have repeated already, without achieving remarkable successes that Saakashvili’s government also had.

Forthcoming change of the electoral system will seriously boost the confidence of the opposition: For the first time, ousting GD through elections started to look realistic. That may still prove difficult as it will need the much higher level of cooperation between different opposition groups; but with the prize within reach, there are greater chances of that happening as well.

The events may be a setback for Saakashvili and his party. These are the largest and most successful protests since 2012, and they were fully independent of him. The protesters are mostly young people who emphatically reject Misha (all political parties, actually, but first of all him). They also expressly repudiate his vision that Ivanishvili can be replaced not by elections, but by some replica of 2003 ‘Rose Revolution’ that Saakashvili had led. The protesters conspicuously distanced themselves from any remotely violent attempts like forcing their way into Parliament and are resolute to keep the rallies peaceful. The narrative that Saakashvili’s party is the only viable alternative to Ivanishvili is effectively broken.

Russia’s so-called “soft power” is another big loser. Apparently, the Russians had a genuine illusion that because Georgians treated numerous Russian tourists kindly their anger at Putin’s policies had largely expired, and it was only Saakashvili’s party that kept the anti-occupation discourse alive. Now we saw that the anti-Russian-occupation sentiment still has a strong mobilizing power irrespective of Saakashvili’s appeal.