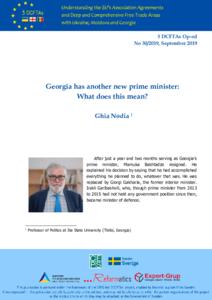 Georgia has a new prime minister again: What does this mean?

After just a year and two months serving as Georgia’s prime minister, Mamuka Bakhtadze resigned. He explained his decision by saying that he had accomplished everything he planned to do, whatever that was. He was replaced by Giorgi Gakharia, the former interior minister. Irakli Garibashvili, who, though prime minister from 2013 to 2015 had not held any government position since then, became minister of defence.

Does this reshuffle imply anything of consequence for Georgia? Firstly, it reminds us of its peculiar political system. According to the country’s formal Constitution, the prime minister is supposed to be the most powerful person in Georgian politics; according to the unwritten constitution, however, the role is just that of an easily expendable manager under the true king – Bidzina Ivanishvili, a billionaire founder and leader of the Georgian Dream (GD), a party that came to power after winning elections in October 2012. He served as prime minister for only the first year before his resignation, but few informed analysts doubted that he has stayed as Georgia’s principal decision-maker ever since. It was him whom Gakharia, the fifth prime minister in the seven years of GD tenure in power, publicly thanked for his appointment.

Why Ivanishvili becomes dissatisfied with his first viziers so quickly, and how long Gakharia stays, is anybody’s guess. But one thing is for sure: this appointment is the most controversial so far.

On the night of 20-21 June, Gakharia led a violent dispersal of a public rally in response to Sergei Gavrilov, the Russian Communist MP, being put in the chair of the speaker of Georgian Parliament (he was chairing the session of the Interparliamentary Assembly on Orthodoxy). Some of the protesters tried to force their way into Parliament building. This irresponsible action gave the government grounds to use force, but many people considered the methods used by the police too harsh. Two people lost eyes from rubber bullets. This led to even larger protests. Eventually, the numbers went down, but people have kept gathering in the centre of Tbilisi to demand Gakharia’s resignation every single day since then. Instead, he was promoted.

We cannot know what exactly prompted Ivanishvili to take this apparently unpopular decision, but we can look into the context in which it was taken. A year before the crucial parliamentary elections expected in October 2020, GD is losing popularity but it is determined not to allow its power to slip away. This pushes it to use heavy-handed methods against political opponents.

In the wake of the ‘Gavrilov night’, the Georgian government panicked, as it often does when it sees many angry people in the street. The speaker of Parliament resigned, an MP who had organised the event with Gavrilov’s participation gave up his seat. Most importantly, GD agreed to change the Constitution in favour of a fully proportional electoral system – if this promise is kept, GD will have few chances of obtaining an outright majority in the future Parliament. Most people expected that the latest demand of the protesters – Gakharia’s resignation – would also be met.

However, that is where the government decided to draw the line. Supposedly, further concessions would make it look too weak, so it decided to go on the offensive instead. It alleged that an attempt to storm the Parliament building was an opposition-led conspiracy to stage a coup, and Gakharia saved the country from it. Thus, Gakharia became a symbolic figure for both parties. For government critics, he represents police brutality; for government supporters, however, he personifies firmness in confronting the adversary.

This turns Gakharia’s appointment into an act of defiance. It also sends a signal to those supporters who might have been concerned that the GD was losing ground. Gakharia is seen as a tough guy capable of keeping the party together and not bending in the face of adversity.

There is also a Russian dimension here. Gakharia has spent a large part of his career in Russia and, until recently, held a Russian passport. It became a popular question to ask whether his appointment will strengthen the pro-Russian vector in Georgian policies. The above-mentioned Sergei Gavrilov publicly welcomed the reshuffle, praising the new prime minister for standing firm against “the radicals” (this implies any protesters critical of Russia) and expressed hope that the new prime minister will be “brave enough” to start real negotiations with its northern neighbour.

Does Gakharia’s appointment mean that Georgia may change its course? Probably, formally, nothing will change. If the Gavrilov incident showed anything, it is that openly pro-Russian gestures may provoke strong public protest and mobilise the opposition – this is the last thing the government needs.

On the other hand, it has become part of the standard message package of the government to blame all economic woes on irresponsible and destabilising actions of the opposition whose aim is to disrupt Georgia's economic cooperation with Russia. This is a strong overstatement: indeed, Putin punished Georgia for showing disrespect to Russia by cancelling direct flights between the two countries. This led to a decline in the number of Russian tourists to Georgia, though this decline was mainly compensated by tourists from other countries. Apart from blaming economic problems on the opposition, the government rhetoric may be a signal to Moscow: we have a common enemy, the Georgian opposition.

Which leads us to the main point. What may be really ‘Russian’ in Georgia, is the way of treating the opposition. On this account, Georgia has not reached Russian standards yet, but some people are afraid that it may be moving in that direction. For the alleged “coup attempt” on 21 June 21, the government charged some opposition politicians and imprisoned more than ten people. Criminal charges were issued against Mamuka Khazaradze and Badri Japaridze, respected bankers who announced plans to start an oppositional political movement that might prove dangerous for the ruling regime. Nika Gvaramia, a founder of Mtavari Arkhi, a new independent TV channel due to start broadcasting on September 9, also faces criminal charges. There had already been a strong impression that Georgia’s ruling party is using the law enforcement system against its opponents; the choice of a new prime minister may imply that this will indeed be an important part of its strategy in the election year.