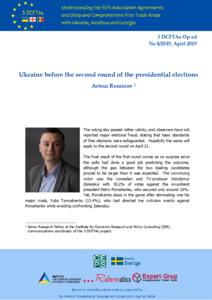 Ukraine before the second round of the presidential elections

The voting day passed rather calmly, and observers have not reported major electoral fraud, stating that basic standards of free elections were safeguarded. Hopefully the same will apply to the second round on April 21.

The final result of the first round comes as no surprise since the polls had done a good job predicting the outcome, although the gap between the two leading candidates proved to be larger than it was expected. The convincing victor was the comedian and TV-producer Volodymyr Zelenskyi with 30.2% of votes against the incumbent president Petro Poroshenko, who secured only around 16%. Yet, Poroshenko stays in the game after eliminating one his major rivals, Yulia Tymoshenko (13.4%), who had directed her criticism mainly against Poroshenko while avoiding confronting Zelenskyi.

Who is Mr Zelenskyi and what to expect next, read in the op-ed following the button below.