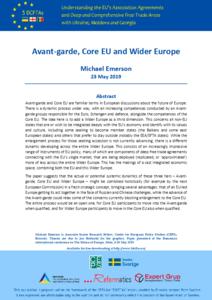 Avant-garde and Core EU are familiar terms in European discussions about the future of Europe. There is a dynamic process under way, with an increasing competences conducted by an Avant-garde groups responsible for the Euro, Schengen and defence, alongside the competences of the Core EU. The idea here is to add a Wider Europe as a third dimension. This concerns all non-EU states that are or wish to be integrated deeply with the EU’s economy and identify with its values and culture, including some seeking to become member states (the Balkans and some east European states) and others that prefer to stay outside (notably the EEA/EFTA states). While the enlargement process for those seeking accession is not currently advancing, there is a different dynamic developing across the entire Wider Europe. This consists of an increasingly impressive range of instruments of EU policy, many of which are components of deep free trade agreements connecting with the EU’s single market, that are being deployed (replicated, or ‘approximated’) more of less across the entire Wider Europe. This has the makings of a vast integrated economic space, combining both the EU and this Wider Europe.

The paper suggests that the actual or potential systemic dynamics of these three tiers – Avant-garde, Core EU and Wider Europe – might be combined holistically (for example by the next European Commission) in a fresh strategic concept, bringing several advantages: that of an EU-led Europe getting its act together in the face of Russian and Chinese challenges, while the advance of the Avant-garde could relax some of the concerns currently blocking enlargement to the Core EU. The entire process would be an open one, for Core EU participants to move into the Avant-garde when qualified, and for Wider Europe participants to move in the Core EU also when qualified.