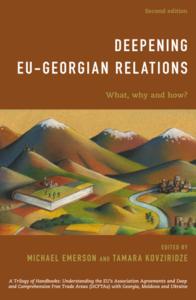 Deepening EU-Georgian Relations: What, why and how? Second edition

This Handbook, now in its second edition, represents the most comprehensive and independent assessment of the Association Agreement and Deep and Comprehensive Free Trade Area (DCFTA) between the EU and Georgia. It is one of a Trilogy of Handbooks, alongside comparable publications on Moldova and Ukraine.

The signing of Georgia’s agreement with the EU in 2014 was an act of strategic geopolitical significance. Of all the EU’s eastern partners Georgia had distinguished itself since the Rose Revolution of 2003 by pushing ahead with the most radical liberalisation and economic reform agenda, reinforced now with the Agreement with the EU. Georgia is unique among the countries of eastern Europe in having largely cleansed its economic and political system of corruption. Hence it has become something of a model case, of high interest to other transition economies and societies. The operational workings of these reform programmes are elaborated in detail in the Handbook.

The Handbooks have been described as a ‘one-stop guide’ or ‘bible’ on the Agreements, and are thus indispensable reference materials for policy-making officials in both the EU and the three countries, as also for leading business interests, academia and non-government organisations.