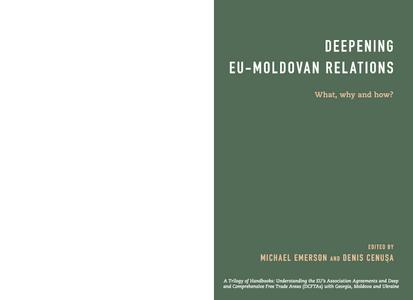 Deepening EU-Moldovan Relations: What, why and how?

The signing of the Association Agreement and DCFTA between Moldova and the European Union in 2014 was a strategic political act to deepen the realisation of Moldova’s ‘European choice’. Of all the EU’s eastern neighbours, Moldova is objectively the most European on several accounts, including sharing a common history, language, culture and border with its direct neighbour and now EU member state Romania. This signifies highly positive foundations for making a success of the Agreement, notwithstanding the major political and economic challenges that contemporary Moldova faces.

The purpose of this Handbook is to make the legal content of the Association Agreement clearly comprehensible. It covers all the significant political and economic chapters of the Agreement, and in each case explains the meaning of the commitments made by Moldova and the challenges posed by their implementation.

The work has been carried out by two teams of researchers from leading independent think tanks, CEPS in Brussels and the Expert-Grup in Chişinău, with the support of the Swedish International Development Agency (Sida). It is one of a trilogy of Handbooks, with the other two volumes examining similar Association Agreements made by the EU with Ukraine and Georgia.

Co-published with Rowman and Littlefield International (RLI), this book is can be purchased for £24.95, either in paperback or as an e-Book from the RLI website.