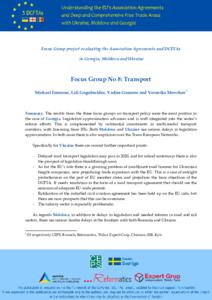 The results from the three focus groups on transport policy were the most positive in the case of Georgia. Legislative approximation advances and is well integrated into the sector’s reform efforts. This is complemented by substantial investments in multi-modal transport corridors, with financing from IFIs. Both Moldova and Ukraine see serious delays in legislative approximation. In both cases there is also scepticism over the Trans-European Networks.

Specifically for Ukraine there are several further important points:

As regards Moldova, in addition to delays in legislation and needed reforms in road and rail sectors, there are serious border delays at the frontiers with both Romania and Ukraine.