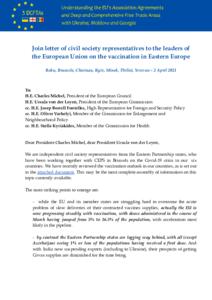 cc. H.E. Oliver Varhelyi, Member of the Commission for Enlargement and Neighbourhood Policy

cc. H.E. Stella Kyriakides, Member of the Commission for Health

We are independent civil society representatives from the Eastern Partnership states, who have been working together with CEPS in Brussels on the Covid-19 crisis in our  six countries. We have recently reviewed the vaccination outlook in our countries, as is set out in the attached document. This may be the most complete assembly of information on this topic currently available.

The most striking points to emerge are:

-  while the EU and its member states are struggling hard to overcome the acute problem of slow deliveries of their contracted vaccines supplies, actually the EU is now progressing steadily with vaccination, with doses administered in the course of March having jumped from 5% to 16.5% of the population, with acceleration most likely in the pipeline.

-  by contrast the Eastern Partnership states are lagging way behind, with all (except Azerbaijan) seeing 1% or less of the populations having received a first dose. And with India now suspending exports (including to Ukraine), their prospects of getting Covax supplies are diminished for the time being.

-   In terms of contracted supplies, the EU's 2.6 billion contracted doses are likely in due course to amount to more than twice its needs.  Even if some of these contracts are behind schedule for delivery they already lock up production capacities, making it extremely difficult for other weakly placed states to secure adequate supplies.

We appreciate that the EU and its member states are making major contribution to the WHO Covax scheme, which may supply vaccines for 20% of our populations.

Additionally, with regard to the EU’s future surplus supplies, we note that official documents of the EU include only the following weak formulation: "Should all vaccines prove to be safe and effective, Member States have the possibility to donate part of their doses to lower and middle income countries". Actually Romania has taken the lead here, with 200,000 doses promised to Moldova, and 70,000 delivered so far. It would be excellent if more EU member states would follow this model already now. There are press reports that some member states are in effect stockpiling unused AstraZeneca vaccines because of popular preferences for other vaccines, and these amounts could surely be redirected to countries such as ours.

The proportions of the EU's contracted supplies in relation to the population size of its neighbours in the Balkan and Eastern Partnership regions makes it possible to envisage a hugely important contribution to these states (we take these two European neighbouring regions together since the EU aided both together at the early stage of the pandemic). These 12 states have a total population of a little under 100 million people, whereas the EU's likely surplus supplies beyond its own needs should be enough to cover this ten times. This would therefore only marginally reduce the extent of surplus supplies for other world regions. We can imagine the EU making a special effort also for Africa, given that in the Americas and Asia the most populous states there have their own huge vaccine production capabilities.

For the Balkan and Eastern Partnership regions one might hypothesize the EU supplying these countries directly with around 50% of their needs, adding to the Covax 20% and various other limited amounts contracted by themselves. Thus, for example, vaccination completed for 50 million people would need a maximum of 100 million doses. These are quite limited amounts in relation to the EU's contracted supplies, but an effort on this scale would translate into a huge, strategic and badly needed advance for the EU's role in the region. Importantly, this would contribute to a quicker recovery of the Eastern Partnership states from the economic and social crisis caused by the pandemic, as well as to the improvement of health and safety of our citizens.

The EU summit of 25 March was understandably heavily focussed on the EU's internal problems of vaccine supplies. It would be greatly to the EU's credit if it added now a seriously developed prospect of bilateral vaccine supplies for its close neighbours, for as soon as the supply situation eased into the large surplus that seems highly likely to emerge.

The EU was quick to show its solidarity towards both Balkan and Eastern Partnership states with substantial financial and technical assistance early on in the pandemic. We would expect the EU to follow through now in the vaccination stage.

We have noted the initiative of President Charles Michel in favour of a new international treaty to better order the global response to pandemics of the kind we are experiencing. This is an excellent idea for tomorrow, but for today our practical priority need is for vaccine supplies.

In conclusion, is it not time for the EU to make a political declaration along the following lines?

-  First, an invitation to EU member states to indicate their possibilities to make immediate if limited bilateral contributions to our countries already (Romanian style);

-   Second, an announcement of intent by the EU to make a major direct contribution to the needs of its European neighbours, with provisional quantitative indications along the lines suggested above;

-   Third, the opening of a structured dialogue with our countries on the organisation of such initiatives to help our governments draw up their own plans.

As we were concluding this letter we heard on 1 April the Secretary-General of the United Nations expressing his concern over the richest countries (implicitly both the EU and US) pre-emptively buying huge quantities of vaccine beyond their own needs, to the disadvantage of other less wealthy countries. We share this concern, and are suggesting how the EU for its part could allay it.