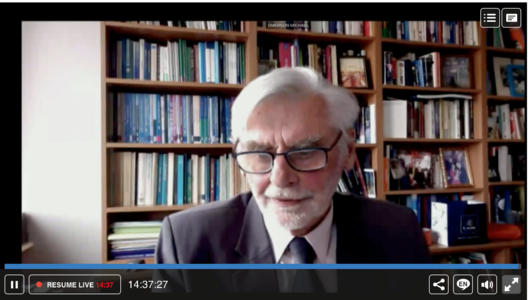 Key debate on Recovery, Resilience and Democratisation Perspectives for a post-Covid-19 Eastern Partnership

Thank you, Mr President, for the honour of being invited to speak.

Representatives of civil society in both Eastern Partnership states and the EU advocate two propositions, both of which aim at enhancing recovery and resilience of Eastern European states (with supporting texts):

As regards the association agreements with Ukraine, Moldova and Georgia there is broad agreement in the three states and among independent think tank observers in both the three states and the EU that, while the existing agreements have achieved a lot, the status quo still lacks politically significant momentum and adequate incentives to drive further forward the reform and European integration processes.

The open question is how to make good this deficit in a “politically strategic” manner, as Olga Stefanishyna, deputy prime minister of Ukraine, has just argued.

The first study seeks to design a New Momentum, around three pillars.

1/ push forward with functional, sectoral and financial integration with the EU, on a path leading to full access to the benefits of EU policies. This is underway to some degree, for example on joining the energy and digital unions and Green Deal, but needs stronger impetus.

3/ these two dynamics – functional and institutional - would be subject to a real and credible system of conditionality, built around objective and quantified ratings of performance in relation to all the chapters of the agreements. The study has illustrated how this could be done, moving way beyond the current, vague, ‘more for more’ slogan that lacks credibility.

Vaccination in the Eastern Partnership states. The basic facts are sounding the alarm clearly enough:

This is suggesting of a grave problem of international solidarity, with the EU (as also the US and UK) able – out of an abundance of caution - to contract vaccines in quantities way above their needs. For others there is little available, since production capacities have been largely pre-empted by the strongest players.

This is bad. What to do? As advocated in the Joint Letter sent to EU leaders by the Civil Society Forum, the EU could announce today that it was pledging to supply 100 million doses (under 2% of its contracted amounts) to all its territorially closest neighbours, i.e. the six Balkan and 6 Eastern Partnership states, most of whom are highly connected physically with the EU with visa-free travel. Doses could be supplied initially in small quantities (for example unused AstraZeneca stockpiles in some EU countries), with full deliveries as soon as the supply chains are fully functioning.

The EU already contributes generously to the WHO Covax scheme, which can supply 20% vaccination coverage, and some of this begins to reach Eastern Partnership states. But this scale is small compared to the 70% vaccination objective often now being set, notably by the EU for itself, as also for example by Ukraine.  The EU considers itself on track to reach this goal by the summer. For Ukraine this is hardly so.

So the basic arithmetic is this. 100 million doses for the EU’s two neighbouring regions would add roughly another 50% vaccination coverage (with two jabs per capita for a population of just under 100 million for the two regions), and so raise the Covax vaccination coverage of 20% to the targeted 70%. A huge achievement for the Eastern Partnership states, through only a very marginal contribution from the EU’s contracted supplies.

An action along these lines would at this point be the most effective way of speeding up economic recovery, and also an act of humanitarian and political solidarity. We heard earlier today from the President of the European Parliament, David Sassoli, that the EU should ‘do more’ in solidarity with its Eastern Partners. We representatives of the Civil Society Forum of the Eastern Partnership agree, and are suggesting concretely how this could be done.