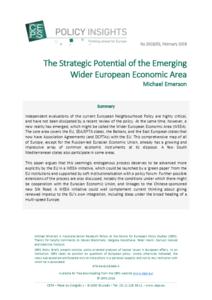 The Strategic Potential of the Emerging Wider European Economic Area

Independent evaluations of the current European Neighbourhood Policy are highly critical, and have not been dissipated by a recent review of the policy. At the same time, however, a new reality has emerged, which might be called the Wider European Economic Area (WEEA). The core area covers the EU, EEA/EFTA states, the Balkans, and the East European states that now have Association Agreements (and DCFTAs) with the EU. This comprehensive map of all of Europe, except for the Russian-led Eurasian Economic Union, already has a growing and impressive array of common economic instruments at its disposal. A few South Mediterranean states also participate in some areas.

This paper argues that this seemingly endogenous process deserves to be advanced more explicitly by the EU in a WEEA initiative, which could be launched by a ‘green paper’ from the EU institutions and supported by soft institutionalisation with a policy forum. Further possible extensions of the process are also discussed, notably the conditions under which there might be cooperation with the Eurasian Economic Union, and linkages to the Chinese-sponsored new Silk Road. A WEEA initiative could well complement current thinking about giving renewed impetus to the EU’s own integration, including ideas under the broad heading of a multi-speed Europe.