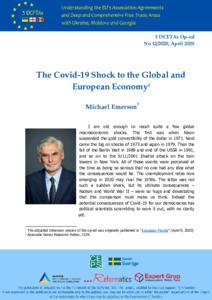 The Covid-19 Shock to the Global and European Economy

I am old enough to recall quite a few global macroeconomic shocks. The first was when Nixon suspended the gold convertibility of the dollar in 1971. Next came the big oil shocks of 1973 and again in 1979. Then the fall of the Berlin Wall in 1989 and end of the USSR in 1991, and so on to the 9/11/2001 jihadist attack on the twin towers in New York. All of these events were perceived at the time as being so serious that no one had any idea what the consequences would be. The unemployment rates now emerging in 2020 may rival the 1930s. The latter was not such a sudden shock, but its ultimate consequences – Nazism and World War II – were so huge and devastating that this comparison must make us think. Indeed the potential consequences of Covid-19 for our democracies has political scientists scrambling to work it out, with no clarity yet.

But this shock, Covid-19, beats them all, at least for Europe and the global economy. Never before has a sudden shock brought the economy to a virtual standstill. Well there was the Black Death in the 14th century, also arriving along the Silk Road from East Asia, which wiped out up to half of Europe’s population. Where would we be now without modern hygiene, health care and today’s social distancing?

Actually the sudden ending of the Soviet Union, and the Yeltsin-Gaidar shock therapy starting on 1 January 1992 is an interesting  comparator. An old system was scrapped, without a new one ready to take over. The people’s savings were wiped out overnight. Military equipment orders ceased, devastating the industrial-military complex. I recall visiting then huge enterprises in the Urals , desperately trying to convert their production lines, in one case from cruise missile handling machines into forestry equipment, and in another case from bombs into civilian gas cylinders. And currently we witness in Europe manufacturing enterprises converting from perfume packaging into sanitary sprays, and from vacuum cleaners into ventilators, and so on.

The Covid-19 pandemic seems now to be manageable at the medical level, after a few weeks of extreme distress. The phases are known, from initial contamination, then exponential rise, on to a peak moment, before gradually descending with declining infection and death rates, until it is stopped – in somewhere around six weeks to two months. Yet the risks of second waves exist too, and the Black Death saw a second and several subsequent pandemics.

But back to today, beyond the medical challenge, how is Europe responding to the macroeconomic consequences of Covid-19? In short: already with massive financial interventions, with key policy norms set aside, and further major decisions under debate, with big differences of position over some big choices at the level of the EU and Eurozone. Never before has Europe seen such a rapid and massive response, albeit not yet adequate.

The European Central Bank has taken important measures. It will make €120 billion of additional asset purchases until the end of 2020 under an existing (APP) programme, and another €750 billion of purchases of private and public sector securities under a new Pandemic Emergency Purchase Programme (PEPP). The total of €870 billion, intended to assure liquidity of the financial system, amounts to 6% of eurozone’s GDP. In addition the supervisory authorities of the Eurozone have temporarily eased regulatory requirements in relation to bank capital, liquidity and non-performing loans. Banks have been asked not to distribute dividends and use the conserved capital to support small businesses and households.

As regards fiscal policy there is a plethora of initiatives, some at the EU level, but mostly others at the national level.

The EU itself mobilises about €37 billion (0.3% of GDP) of budgetary resources, including a Corona Response Investment Initiative, and a EU Solidarity Fund in support of public health actions, and support for SMEs and stressed region. The European Investment Bank re-directs resources to provide liquidity to SMEs. The European Commission waives certain EU fiscal rules limiting budget deficits of member states above the 3% of GDP level.

As regards national budgetary policies, space here allows for only a sample of measures being taken:

These national measures show common features, which are found also in most other EU states. The extent of budgetary expansionist measures is most often in the range of 1 to 2% of GDP, but with Germany as outlier deploying what its minister of finance called his “big bazooka” of almost 5%. These are supporting extra health expenditures, income support for unemployed or people of reduced time working, postponement of tax and in some cases rent and utility payments. Far large amounts are being extended in the form of public sector guarantees for credit extension by the financial system.

Repeatedly in past decades there have been efforts to devise coordinated economic policy measures at the level of the EU and G7, with invitations to the countries with most budgetary room for manoeuvre to take the lead, to allow others less well placed to take also expansionary measures. These efforts have consistently been frustrated by refusal of key countries to take the lead. This time it is different. The gravity of the Covid-19 crisis has triggered uniquely fast, substantial and coherent measures by EU countries to face the immediate crisis in Europe. These measures were not actually coordinated, but rather there has been a spontaneous process of replicating what seemed to emerge as the most advisable policy packages. This will lead on to the requirements of full post-Covid-19 recovery, but whose amplitude and duration cannot yet be anticipated.

Indeed there is awareness that these national measures are not going to be sufficient. Bigger financial initiatives at the level of the Eurozone of EU are under negotiation with tense and emotional debate between member states. On 7 April Eurozone finance ministers struggle over 16 hours of video-linked emergency debate over the options, but failed to agree on what to do. A first proposal is to activate the existing European Stability Mechanism with €440 billion (3% of GDP) at its disposal. The problem here is that it would leave the most affected states with big additional debt burdens and the need to meet conditions. Italy first of all rejects this as unacceptable, since the cause is not anything to do with inadequate fiscal policies, and the situation calls for basic human solidarity. Its position receives support from Spain and France. Italy and other southern states advocate ‘Eurobonds’ or ‘Coronabonds’, with the EU itself accepting the debt burden, and the money raised would be transferred to member states to pay for measures to support the economy and incomes of those thrown out of work. This is resisted by several northern states, most vocally by the Netherlands, with Germany taking a more hesitant position. A third related option being promoted by the Commission is that it would issue bonds and use the money to expand its expenditures beyond its present ceiling of 1% of GDP temporarily for few years up to nearer 2%.

The issues at stake are of high political sensitivity and ultimate systemic importance. In the political background stands the huge existential choice: whether the EU would thus be taking a seminal step towards fiscal federalism, or, if not, whether it would see Italy in bitter desperation following the Brexit route. The EU normally finds a compromise solutions in crisis situations after many long and hard meetings. The president of the Eurozone finance ministers reported in the morning of 8 April that he had suspended the meeting, to be resumed on Thursday 9th, saying the agreement on ‘innovative solutions’ was near, but not yet concluded.

The EU’s existential crisis, averted with compromise – as usual

Since my contribution to the paper on 8 April ended with the EU facing a huge existential choice, to be resolved the following day, we should update the story.

On 9 April a compromise was reached, as usual, as many Brussels old-timers would say. Finance ministers agreed on three measures mobilising €540 billion or about 3.6% of GDP:

-       The European Stability Mechanism is to be activated for Eurozone countries up to the €240 billion, but borrowers will not face the usual macroeconomic policy conditionality, only the requirement to use the funds for countering Covid-19 damage to the economy and society.

-       There will be €200 billion increased loan guarantees from the European Investment Bank to support small and medium-sized enterprises.

-       There will be a new and temporary instrument, called ‘SURE’, under which the European Commission would raise loans of up to €100 billion, to be made available to member states which need support for their labour market measures, including short-time work and unemployment benefits.

-       In addition there is agreement to work up a new Recovery Fund.

These new decisions are on top of fiscal measures by member amounting to states 3% of EU GDP, and additional monetary liquidity measures amounting to 16% of GDP.

So the amounts are massive, with more to come.

As the lockdown continues, homeworking and video-conferencing reach a point that many commentators see now a permanent structural change to the global economy. Of course many will go back to the office or factory, but many will install themselves at home as their permanent work place. And much flying for business meetings and long-range touristic flying will be gone for ever. Already Co2 emissions in urban centres have fallen drastically, maybe bringing climate objectives into sight of achievement. Could this become the big collateral impact of Covid-19? Have some Greek gods been at work?