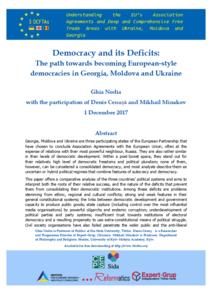 Democracy and Its Deficits: The path towards becoming European-style democracies in Georgia, Moldova and Ukraine

Download
Georgia, Moldova and Ukraine are three participating states of the European Partnership that have chosen to conclude Association Agreements with the European Union, often at the expense of relations with their most powerful neighbour, Russia. They are also rather similar in their levels of democratic development. Within a post-Soviet space, they stand out for their relatively high level of democratic freedoms and political pluralism; none of them, however, can be considered a consolidated democracy, and most analysts describe them as uncertain or hybrid political regimes that combine features of autocracy and democracy.

This paper offers a comparative analysis of the three countries’ political systems and aims to interpret both the roots of their relative success, and the nature of the deficits that prevent them from consolidating their democratic institutions. Among these deficits are problems stemming from ethnic, regional and cultural conflicts; strong and weak features in their general constitutional systems; the links between democratic development and government capacity to produce public goods; state capture (including control over the most influential media organisations) by powerful oligarchs and endemic corruption; underdevelopment of political parties and party systems; insufficient trust towards institutions of electoral democracy and a resulting propensity to use extra-constitutional means of political struggle. Civil society organisations have also failed penetrate the wider public and the anti-liberal discourse of traditionally dominant churches and anti-Western media and civil society groups is often supported by Russia.

Despite these structural challenges, the commitment to European values and norms demonstrated by societies in these three countries gives hope that they can eventually consolidate their democratic institutions. It is argued that closer ties to the EU are important in explaining their relatively high level of democratic development. For this reason, the consistent and enhanced commitment of the European Union to this region is crucial to their continued success in this area.