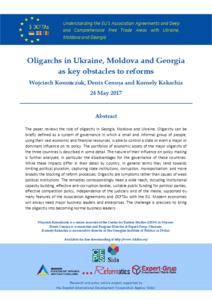 Oligarchs in Ukraine, Moldova and Georgia as key obstacles to reforms

The paper reviews the role of oligarchs in Georgia, Moldova and Ukraine. Oligarchy can be briefly defined as a system of governance in which a small and informal group of people, using their vast economic and financial resources, is able to control a state or exert a major or dominant influence on its policy. The portfolios of economic assets of the major oligarchs of the three countries is described in some detail. The nature of their influence on policy making is further analysed, in particular the disadvantages for the governance of these countries. While these impacts differ in their detail by country, in general terms they tend towards limiting political pluralism, capturing state institutions, corruption, monopolisation, and more broadly the blocking of reform processes. Oligarchs are symptoms rather than causes of weak political institutions. The remedies correspondingly need a wide reach, including institutional capacity building, effective anti-corruption bodies, suitable public funding for political parties, effective competition policy, independence of the judiciary and of the media, supported by many features of the Association Agreements and DCFTAs with the EU. Modern economies will always need major business leaders and enterprises. The challenge is precisely to bring the oligarchs into becoming normal business leaders.