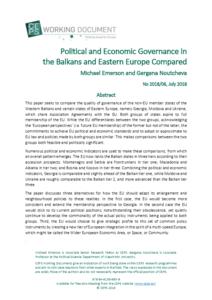 Political and Economic Governance in the Balkans and Eastern Europe Compared

The not-yet EU member states of the Balkans and three states of Eastern Europe – Georgia, Moldova and Ukraine – have much in common: geographic proximity to the EU, political priority to become members of the EU, and similar struggles to improve their political and economic governance in line with EU standards and values.

The EU’s main differentiation between the two groups is over the ‘membership perspective’, which has been offered to the Balkans but not to the East Europeans. Beyond this formal political stance, however, in practice the EU been extending virtually the same comprehensive array of economic and political instruments to both groups by signing Association Agreements with the three Eastern European states.

This paper breaks new ground by comparing the record of both groups in terms of the quality of their political and economic governance. Using original material and existing sources, it finds that the two groups are comparable at two levels; it looks at both the frontrunners and laggards in each group. Most striking is that the East European frontrunner, Georgia, ranks even slightly ahead of the Balkan frontrunners. This leads into a case for reconsidering the EU’s present political doctrines over both its enlargement and neighbourhood policies, which are manifestly obsolescent.

The paper concludes with three options for how the EU might adapt to these realities and make consequential policy changes.